A Tale Of Two Honky Tonks 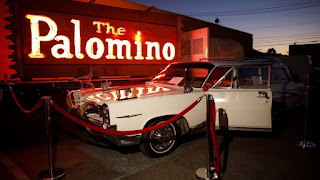 California has a rich history of hell raising establishments.  Books have been written and documentaries filmed about their history and in some cases demise. The Whiskey, the Troubadour, the Crystal Palace, the Palomino and many others all have rich histories and glory days that guided California Country.  The Palomino is now only a neon sign in a museum but that sign and that rich history is embedded in the hearts of the folks that played and drank there.


For almost fifty years a building in North Hollywood was home to the Palomino Club, with it's bright neon sign and wild west bucking bronco reputation. The Flying Burrito Brothers, Linda Ronstadt, Emmylou Harris, Rosie Flores, Gram Parsons, Willie Nelson and a slew of other country and country rock stars made the club their home.


Tipping back whiskey shots and dodging thrown chairs, the Pal was the hotspot for music industry hot shots, out of work actors, truckers and thrill seekers. They crowded in front of the dusty stage nightly for a wild west hootenanny eighteen miles from downtown LA.


North Hollywood at the time was a rowdy place, home to cowboys and stuntmen, far from the art district hipster haven of today. Shitkickers, as they were called, liked to party hard and sleep only occasionally. I have been told parties went on for days. There were fights every damn night and the artists that performed were about as rowdy as the shit kicking patrons. Stories and tales of the shenanigans include horses on stage and Jerry Lee Lewis getting angry and pushing the house piano off the stage. The club's bouncer a 300lb fellow called Tiny even got an arrow in his back from an unhappy patron.


By the end of the 60s, country music was changing. The Nashville acts of the 50s and 60s made way for the long haired country rock stars of the 70s. Gram Parsons and his band, The Flying Burrito Brothers, made the scene with their hippy look and country meets rock sound, Parsons once said he nearly got killed playing the Palomino. But, he became a popular performer at the club with both the shit kickers and the waitresses, who he could turn into sobbing schoolgirls with his southern charm and hillbilly crooning.


In 1969 Keith Richards, Parson's new pal and his girlfriend of the time Anita Pallenberg would spend quite a bit of time getting high in the Hi Desert. Parsons and Richards once even lugged a barber chair up to the crest of a mountain they called their own which afforded them a 360-degree view of the Joshua Tree covered desertscape. It would only be a year later that Parsons would die of an overdose of booze and drugs at the nearby Joshua Tree Inn in 1973.


The previous year only a few miles north of where Parsons died a biker roadhouse opened in Pioneertown and would soon be home to some of the same shitkickers hanging out in North Hollywood at the Palomino with Parsons. 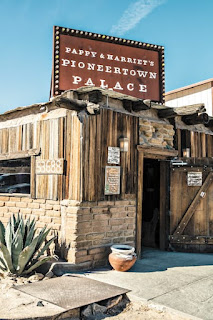 Pioneertown was created as a film stage for the popular Western movies and TV shows of the 50s. Roy Rogers, Gene Autrey, Russell Hayden, and the Sons of the Pioneers (for whom the town was named) were some of the original investors and personalities who helped build and invent Pioneertown. More than 50 films and several television shows were filmed in Pioneertown throughout the 1940’s and 1950’s.


An old saloon facade on the set was purchased in 1972 by Francis Aleba, and her husband John and they created an outlaw biker burrito bar called The Cantina. The Cantina would only last about ten years before John and Francis closed it down but in 1982 their daughter Harriet and her husband, Claude “Pappy” Allen opened “Pappy & Harriet’s Pioneertown Palace” The new venture was a far more family oriented establishment but still home to bikers and live music. Pappy and his granddaughter Kristina along with Harriet would play along with the bands booked into the palace. It was a free spirited place where Pappy lead the fun and Harriet ran the kitchen. In 1994 when Pappy passed hundreds of mourners from around the world attended the memorial. Pappy's was sold and later closed. 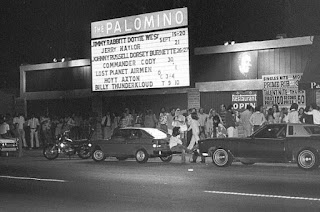 The Palomino Club however was still going strong but the music had changed from honky tonk to mostly rock. Rock and Roll era stars The Everly Brothers, The Pretenders, Red Hot Chili Peppers, Bo Diddley,The Blasters, Albert King, Neil Young, New Riders of the Purple Sage, even Quiet Riot featuring Randy Rhoads, and Canned Heat all played the Pal.  Post punk stars like Elvis Costello and Green Day also played but things were changing and by 1995 the club was no longer economically viable and like Pappy's also closed.


In 2003 Pappy and Harriet's was purchased by Robyn Celia and Linda Krantz, two New Yorkers who loved the venue and wanted to see it returned to its former glory.  They did a lot of repairs to the building and brought the venue back to life with their persistence. 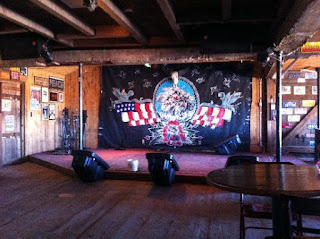 Since then it has become an alt rock mecca that has hosted bands from the Breeders to Arctic Monkeys, Leon Russell to Paul McCartney. With indoor and outdoor stages and a beautiful mountain backdrop it has become a wildly popular destination for LA thirty something's seeking the solace and beauty of the desert.


While ticket prices are far more than the three dollars needed to see top acts of the day at the Palomino most shows sell out. Gone are the days of just walking in and taking a seat at the beautiful rustic bar. While it is painful to see a cherished venue like the Palomino close it is also sad to see any iconic venue change and evolve into something less unique, less cool and less cosmic. Time passes and neighborhoods change, maybe sometimes things happen for the best either way. If you have ever loved a venue, a scene, you certainly know what I mean.


Note… full disclosure, I appear in the following short documentary about Pappy's.
https://vimeo.com/116551630