Down The Hill In The Canyon 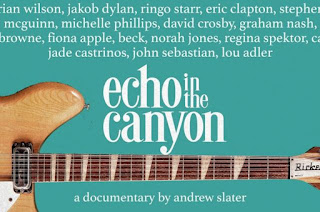 I don't know where to start with the documentary "Echo In The Canyon", should it be the bland live versions of great, classic songs from California's Laurel Canyon music era that make up much of the film?  Should I start with the missed opportunity to tell the whole story, not just 2 years from 1967 to 1969 and even then concentrate on only a few artists? Or, maybe that there was little or no mention of Joni Mitchell whose home was at the center of much of the explosive creativity.


This project, which started as a 2015 performance to celebrate the 50 year anniversary of the Laurel Canyon scene should have been left as just that, a concert film. The labored and incomplete telling of the Laurel Canyon story seems like an afterthought. The promotion of the film was rather misleading as well, leading us to believe it was the complete story of the musical magic that took place in those hills behind Hollywood. There is far too much mediocre  21st century concert and interview footage at the expense of wonderful 20th century archival coolness.


The timeframe documented here by director Andrew Slater and covered in song by Jakob Dylan and his cast of singers took place from 1965 until 1967 when singer songwriters and bands were playing off one another to push the limits of the music coming from across the pond. Folk artists were relocating from New York to California and many settled in the hills behind LA. The meld of rock and folk became the sound of Laurel Canyon but the film totally ignores country music influences being experimented with by not only the Byrds but also by the likes of Linda Ronstadt, Gram Parsons, the Flying Burrito Brothers and others.


“Echo in the Canyon” is a great title however even if the film isn't because it represents only the early echoes of genius and ends far before it describes the ways in which the inspiration shared by these bands lead in so many different directions and continue to reverberate in the music being made in Southern California to this day.


Sadly the history of this California music phenomenon is reduced in 'Echoes in the Canyon' to the Beatles led to The Byrds, and then in turn how The Beach Boys’ landmark album, “Pet Sounds,” inspired “Sgt. Pepper.” Never mind all the music made at Joni's house at 8217 Lookout Mountain that became the place that was memorialized in Our House by CSN or the jams happening at Burrito Manor off Mulholland Dr. Left out were the stories of Jackson Brown, Linda Ronstadt and the Doors, all should be major parts of any telling of this story.


Yes readers this much anticipated film truly disappointed. I felt saddened by the inconsistency of what was included and what was left out the story about the music scene that was such a huge source of happiness in my early life. I'm not suggesting you shouldn't see the film. I am suggesting that you should not expect much more than being underwhelmed at the mediocrity of "Echo In The Canyon".


"Echo In The Canyon" can be purchased on Amazon or streamed from the usual locations.