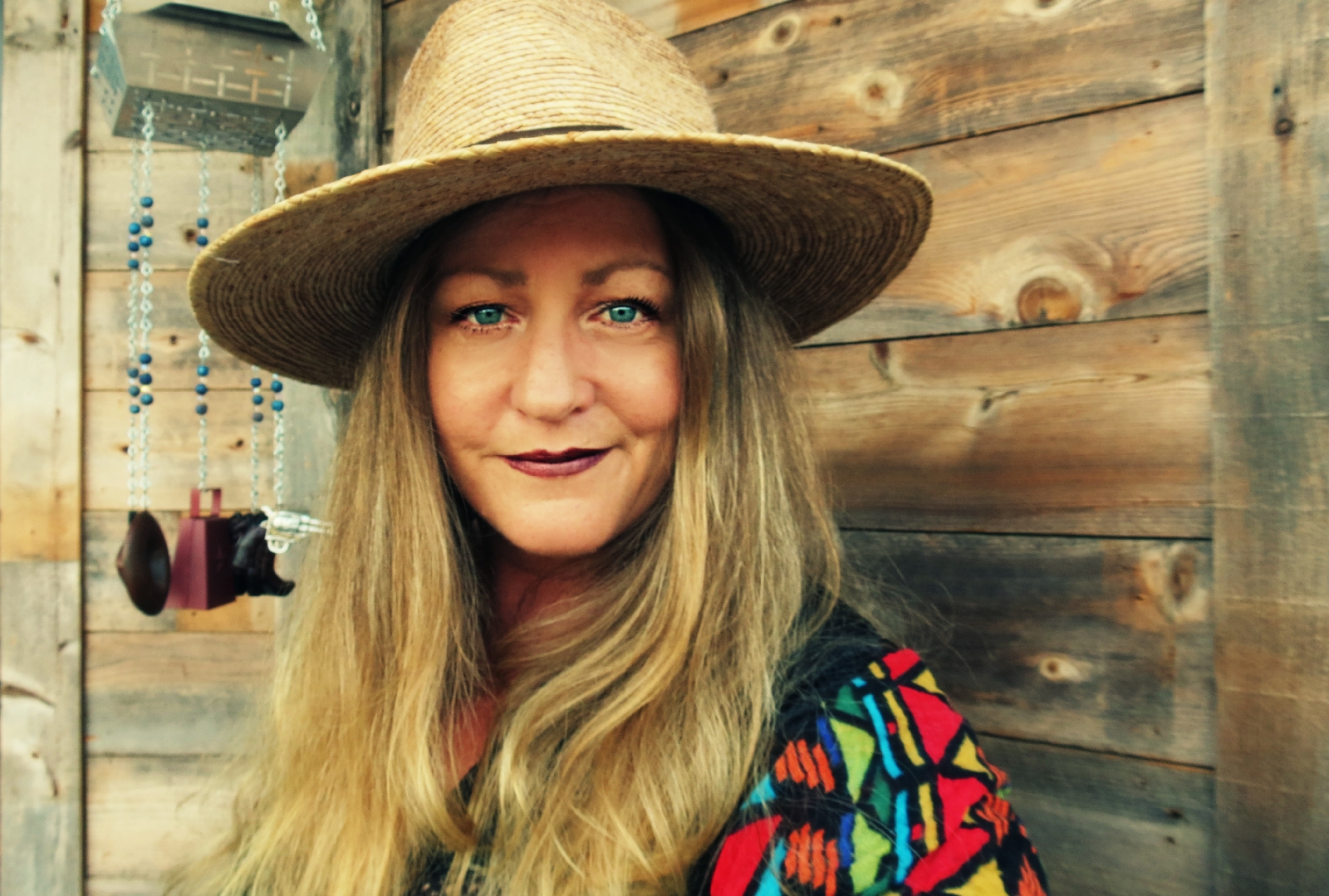 Ronnie: Cathryn, what do you absolutely love about music?

Cathryn:  As a listener? Music is a time machine. When I hear a song my memory takes me back to the first time I heard it...or the best time I had while hearing it. I am transported and I can smell, see, feel, and experience that time again. It's a magical time machine and I can go back to any time I want, visit any place just by selecting the right song.

As a performer music is medicine. It cures my panic attacks and anxiety and depression. It makes me feel like I'm creating and giving back, makes me feel like I'm contributing. It also feels a little like a lottery ticket...like, if I can JUST write the perfect song I'll be set for life (laughing). I love all of that stuff about music.

Ronnie: What brought you to the desert from San Diego?  The desert can be an influential place on us, how has the desert colored your music?

Cathryn: I'd been in San Diego for 20 years and a lot of amazing stuff happened during that time but then I just sort of puttered out around 2016. The world got weird, my writing partner of 18 years moved to the East Coast and I wasn't hosting live shows or my weekly podcast and web series anymore. I was in a funk. I tried exploring different avenues but always ran into road blocks. It just felt like the universe was telling me to move on. My parents are in their 80s and have been in Lucerne Valley for 15+ years and I thought they could use some help around the hacienda so we packed up and moved.

My amazing husband, who has been a very successful sound engineer for over 20 years in SD, was surprisingly supportive of the idea. He is still mostly commuting/working in San Diego which I hope to help change. Jonny is next level good, bands are blown away by his skills and venues appreciate his professionalism and easy nature. He's been out on tour with some high profile bands and has his own gear for large festivals. Any venue would be lucky to have him, he makes magic with all the buttons.

I grew up in Lancaster so the desert has been coloring my music since day 1. My 3rd album is called Desert Music, even. I feel like the desert does to music what it does to photos. It adds a special tone, an otherworldly light and a warmth that you can feel and hear in your soul. I am so happy to be back.

Ronnie:  We are happy you are back! Tell me, how would you describe your music?  How do you think others see it?

Cathryn:  I dunno. When I first started out I was all about rock with a funky vibe and then in early 2000s I leaned more towards that Americana thing and since I'm limited as a player the music I write for myself is sorta folky. If I had to categorize I'd say Americana/Folk/Rock. I have no idea how others interpret it. I'm definitely not mainstream although I've tried to be many times in an effort to get publishing deals and what not. I'm pliable, it all just depends on the musicians I'm playing with. Which is another thing I love about music... it shape shifts. 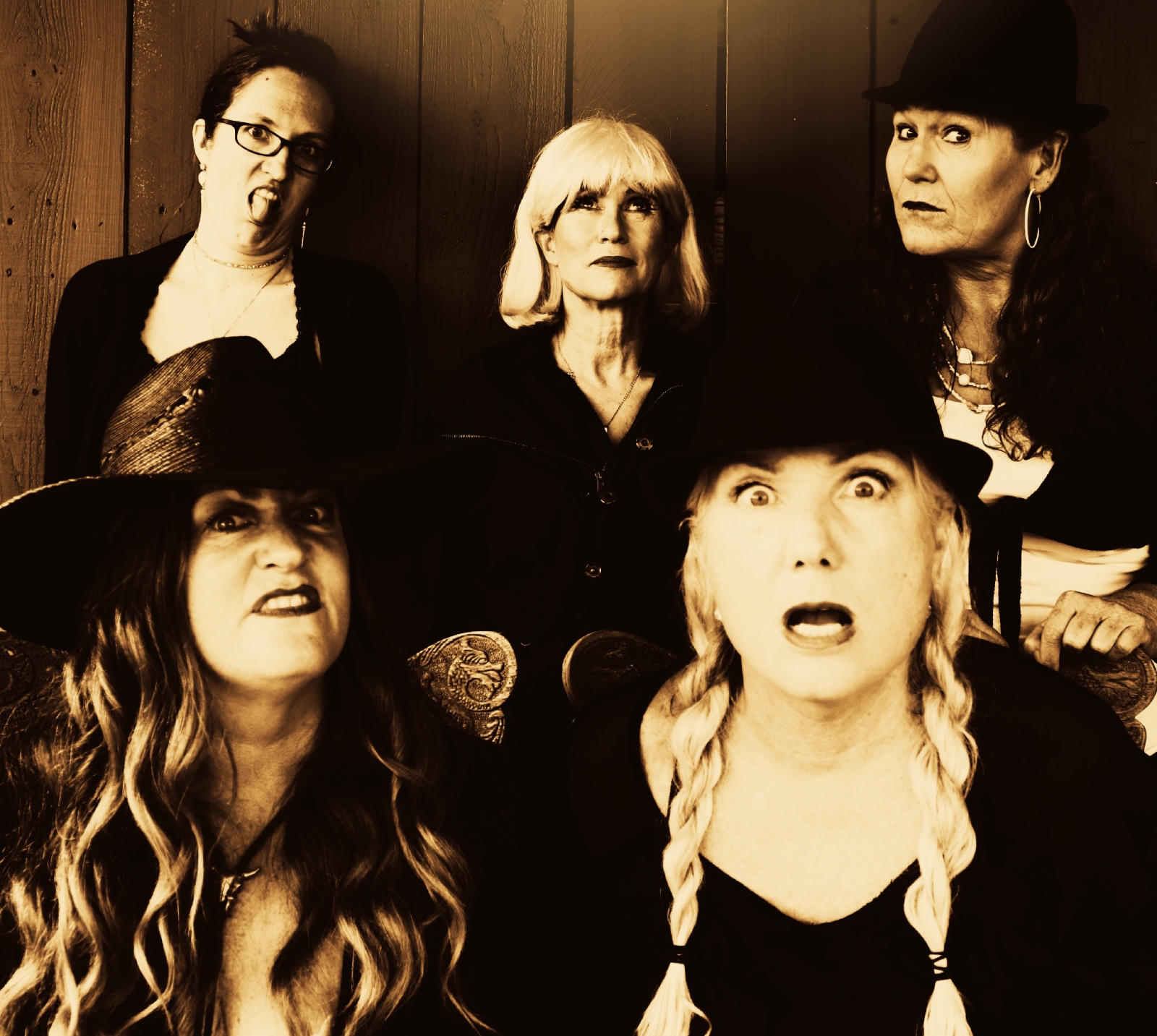 Ronnie: Shape shift it does, tell me about what you are working on now. Who are the players?

Cathryn: Well, although they're all still back in San Diego my main squeeze is Calamity. We are an all female acoustic rock ensemble and our average age is 50 but we are so immature that you'd never know it. Ha. We are sort of theatrical and hilarious and the music is pretty sweet with 3 and 4 part harmonies and a combined bunch of years of experience on our instruments. We've been together since 2013, the core being myself, Nisha Catron and Marcia Claire. Our coven has changed over the years but we're currently lucky enough to have Patric Petrie on violin and Catherine Barnes on drums. We've been on a "studio tour" recording singles at various studios with various producers and releasing them with home made videos. You can hear it all at the website.. We are endeavoring to keep our momentum going even though it's sort of a long distance relationship now. We write together online and Nisha comes up here a lot to write with me. I'm proud of this band as we've been though a lot, it was even suspected at one point that we may be cursed but we persevered and have accomplished some cool stuff like being nominated for a San Diego Music Award and lately we're getting some great gigs. 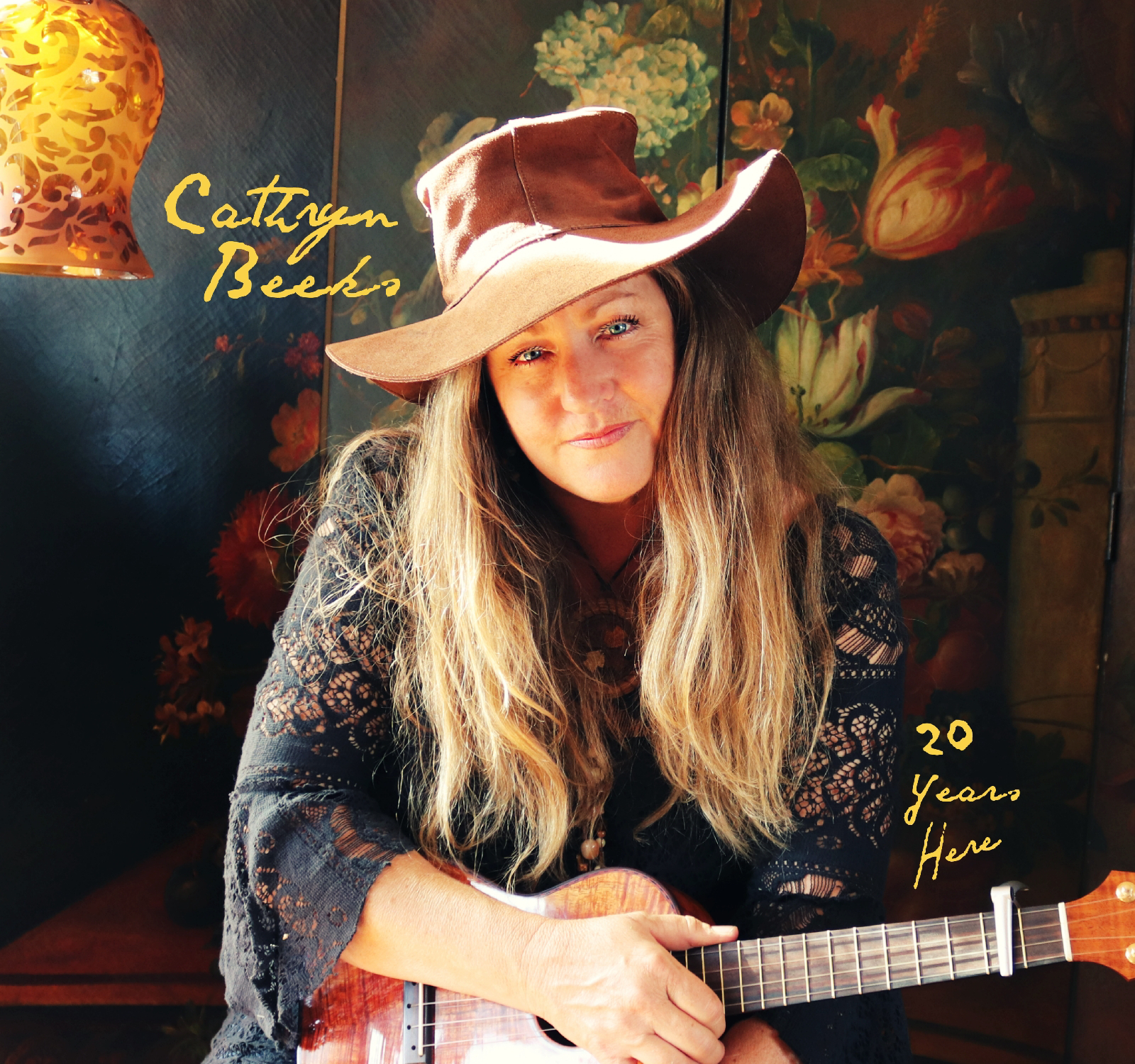 Cathryn: I'm also about to release a solo record. Just before we left San Diego I had asked my longtime producer friend Jeff Berkley to record one of my songs, just me and the ukulele. We ended up recording 6 new songs and adding Jeff on guitar and the baddest rhythm section around...Rick Nash on Bass and Josh Hermsmeier on Drums. The collection is called 20 YEARS HERE and will be released on a USB stick that also contains every other recording with every other band I've ever been in plus a bunch of stuff I produced with Listen Local over the past 20 years, like 2 cook book/CD compilations (recipes and music from local bands), tribute shows, a calendar/cd compilation and more. I'm calling it my TIME CAPSULE and it has almost 200 songs plus lots of bonus stuff. I'm selling them for $40 which supports my podcast and web series, The Listen Local Show. You can hear the single FRAMED and order the collection at my website.

Ronnie: Do you think music can be a vehicle for change?

Cathryn: It's the only thing that will save us. It cuts through cultures, beliefs, stereotypes, fear and hate and all the things that divide us humans. It conveys messages in ways that makes people listen and actually hear... it soothes beasts and gives power to the meek. It connects us. It will guide us through this difficult evolutionary period and once we're all living happily ever after on Love and Peace it will keep us there. That's what I think. 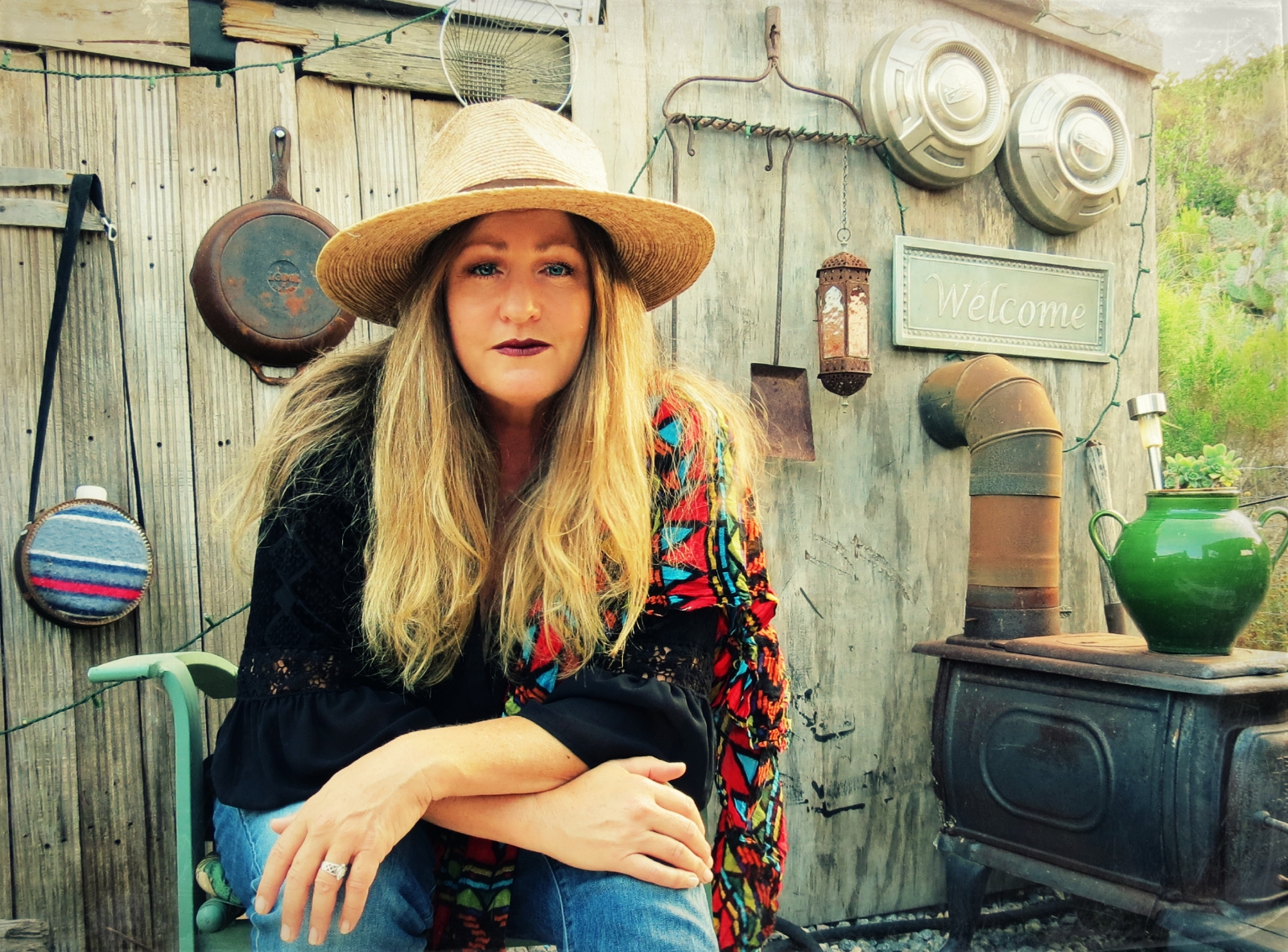 Ronnie: What kinds of things do you like to write about?

Cathryn: My songwriting is pretty much my journal. I write about what's happening, what's happened and what I think will happen. I try not to be too literal so that folks can relate in their own way but I always end up writing my deepest secrets for all to hear. This new collection of songs includes a song called Hey Desert which is about me moving back home to hang out with Hart and Carole Beeks, who I adore. Another song, Burning Star, is about fighting depression and anxiety with the knowledge that we are all energy and nothing can destroy us. Small Town is about the divide in our country these past 3 years and Daylight is about how music is medicine.

I've hosted a songwriting event called The Game since 2004. Every few months I throw out a few tittles and the local songwriting community writes a song using those prompts and we all gather and play our songs for each other. It's really cool to see how different songwriters interpret a title, it's been a really fun event over the years. Pretty much every song on every collection I've released in the past 15 years is a Game song. I'm actually hosting an online version right now, inviting people to write a song to the title WHITE NOISE (submitted by Jeff Berkley) and EARTHQUAKE GIRL (submitted by Steve Poltz) and instead of gathering at a venue to perform our songs, we're all posting them on our Facebook page between now and December 31st. All ages, styles and abilities are invited to play. It's a great way to inspire a new song or just keep your chops up, plus you get to meet a ton of other songwriters, most of them from San Diego. I encourage everyone ot play! 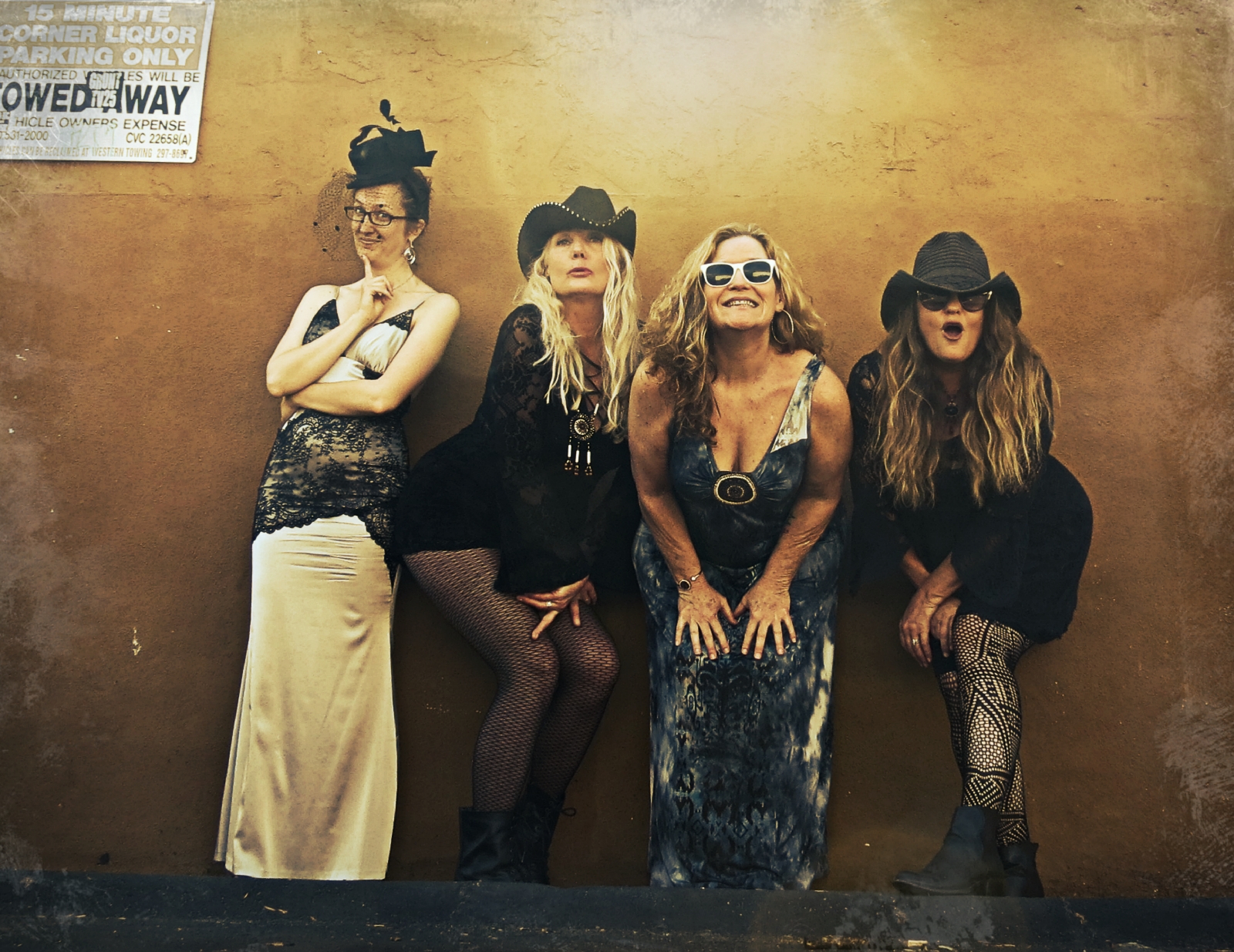 Ronnie:  Everyone has musical heroes, mine are The Rolling Stones, Linda Ronstadt, Gram Parsons and in more  decades R.E.M -- who are yours?

Cathryn: In order of appearance in my life: Willie Nelson, Freddy Fender, Janis Joplin, Melissa Etheridge, The Judds, Ani Difranco, Greta Gaines, Gillian Welch. I kind of stopped listening to famous people about 10 years ago because there were so many incredible unsigned musicians who inspired me...there is SO much great music still to be discovered. 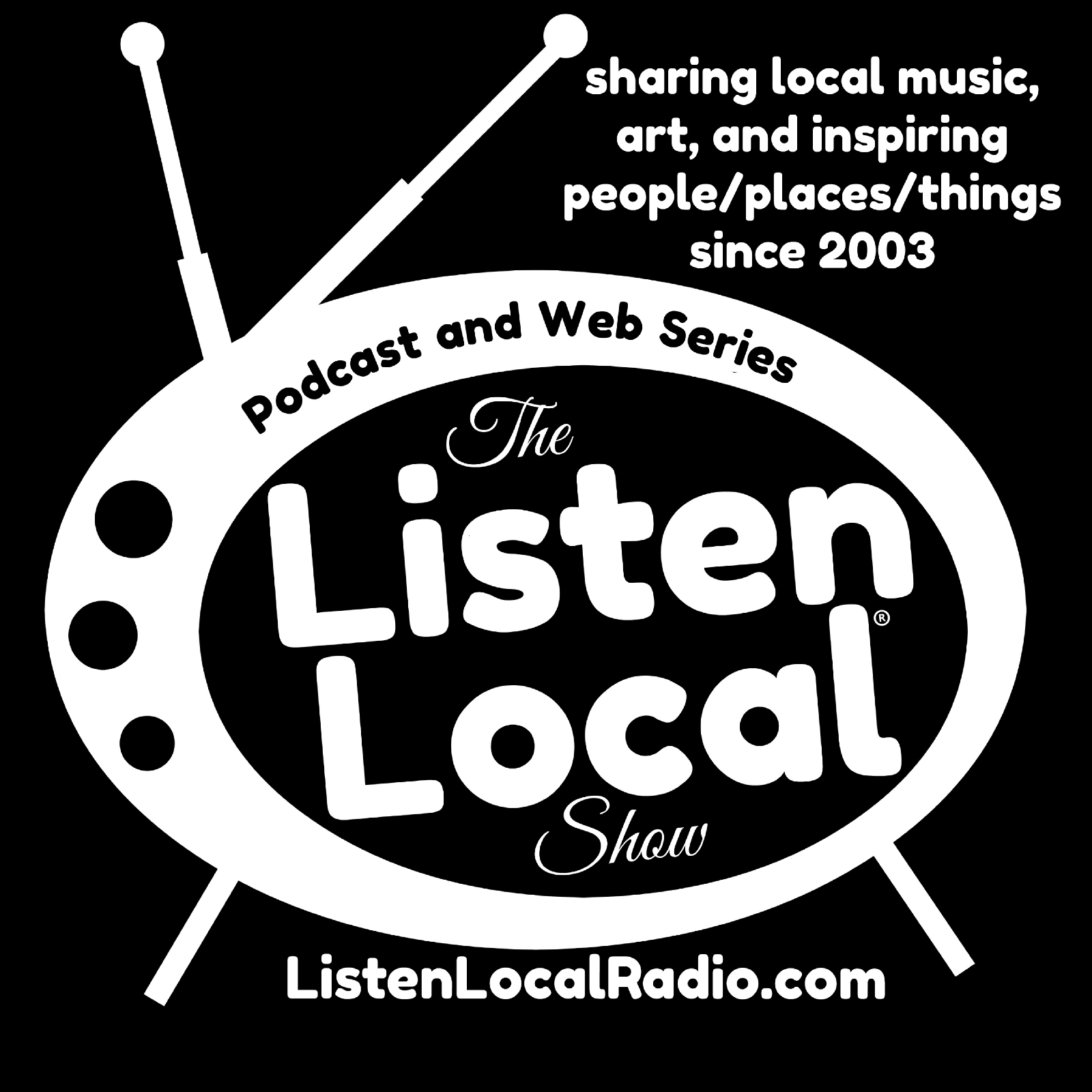 Ronnie:  Tell me a little about your podcast! I love that medium!

Cathryn: Thank you for asking! I moved to San Diego in November of 1999 with high hopes of becoming a rich and famous singer. Once I arrived there I quickly realized that the competition was pretty steep and that my own abilities, while totally awesome, may not be enough to take me all the way. So, I focused my energy on all of the amazing San Diego artists instead and started hosting open mics and showcases to help them find places to share their talent. In 2003 I started calling the showcases LISTEN LOCAL. I learned how to build a website and calendar to allow people to sign up for showcases and then shortly thereafter got my own PA system and I headed out every night to set it up and host shows at various venues, at one point I was doing it 6 nights a week.
With the help of my friend Tim Flack from Idynomite Media I started my first podcast in 2004 featuring these local artist's songs. In 2009 I moved to legit radio on 102.1 KPRi hosting The Homegrown Hour which had been around since the early 80s. I hosted that show for 6 years before the station sold, forcing me to take the show to the internet. The Listen Local Show became a weekly "audio calendar" where I would play music from the bands who would be out performing live that week. Some of the venues would sponsor me in exchange for the promo so I was able to make a little money to support the show. In 2015 I trademarked Listen Local and I added the web show element, too. All of my past shows, both podcasts and FM, are still available and while the shows that were advertised have long since passed, the music is timeless.

Cathryn: I stopped producing a weekly show around 2017, instead offering artist interviews where we play a few songs and chat. Now that I've moved up here I have been reaching out to the local music community inviting them to be featured. I am happy to feature any genre, the only issue is my studio is in my 1978 bread truck here in Lucerne Valley so I'm limited to 2 guests at a time due to space. Anyone interested should reach out to me . I'm also considering starting up the weekly audio calendar again if I can find some supportive local businesses to sponsor the show. Very reasonable rates, give me a shout to discuss! 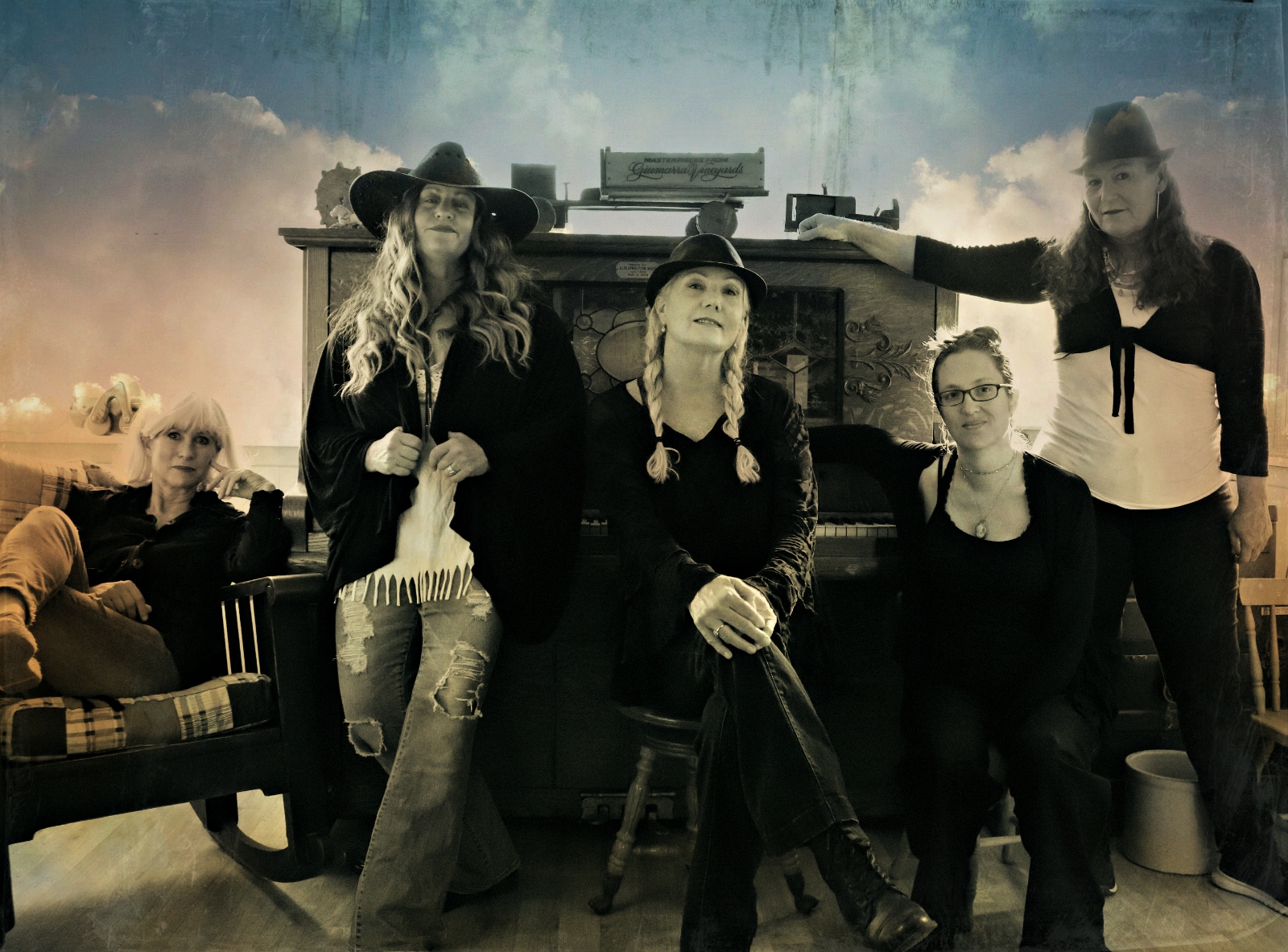 Ronnie: When and where can folks get your new record?

Cathryn: It's ready!! I just received my masters back from Paul Abbott of Zen Mastering in San Diego (who is AMAZING) and I'll be shipping out the USB Time Capsules containing the 7 new songs and 200+ bonus songs next week. Folks can order them at my site.. If you don't want to drop $40 for the collection, I'll be releasing these new songs as singles to the public over the next year via my home made 1/2 Fast Film videos so stay tuned at my YouTube channel.

Cathryn, many thanks for taking the time to talk with us and share your music and best of luck with the new record!